Bill 132, Including Changes to ARA, Now in Committee November 27, 2019
Submit your Health & Safety Award Nominations! November 11, 2019
The OSSGA Health & Safety Committee invites all active OSSGA members to recognize individuals and operations within their organizations that have excelled at making safety a part of their daily responsibilities. The deadline for submissions is Friday, December 13th. The awards and certificates will be presented at the 2020 Operations, Health & Safety Seminar on January 22 & 23rd.
Avenues Fall 2019 Now Available October 30, 2019
OSSGA Responds to CBC Article Reporting on Proposed Policy Changes October 29, 2019
OSSGA Commercial Aggregate and Membership Directory Now Available October 3, 2019
OSSGA Shows Support of Minister Yakabuski's Announcement on Aggregate Reform September 26, 2019
Axle Weight Pilot Project Finished August 26, 2019
The objective of the pilot project was to develop a database that will help standardize the way allowable gross weights and axle weights are collected, stored and used for compliance.
Calling all Speakers! July 9, 2019
Bill 108 on its Way to a Vote! June 6, 2019
The Government of Ontario Has Announced Bill 108 More Homes, More Choices Act, 2017 May 3, 2019
Read 194 More Articles

From the Archives: The Missing Ingredient

*This article was originally published in Volume 6, Issue of Avenues, February 2016.

With the release in 2006 of the Growth Plan for the Greater Golden Horseshoe (GGH), the Province of Ontario set the stage to accommodate another 3.7 million people and 1.8 million jobs in the GGH over a 30-year period. The majority of this growth is planned within the Greater Toronto Area (GTA).

The plan is premised on providing Better Choices and a Brighter Future for the GGH. It guides decisions on a wide range of planning issues, such as transportation, infrastructure, urban form and housing, and resource protection – all in the interest of promoting economic prosperity.

Aggregate resource that supply the construction industry come from either gravel pits developed in sand and gravel deposits, or from bedrock quarries that produce crushed stone products. Some of these aggregate resources can be used in the production of high-quality concrete or asphalt, and can be also meet other construction needs, while lower quality deposits can only be used in more limited applications.

As the GGH plans to grow by intensifying existing communities and building infrastructure that will last longer, the demand for high quality crushed stone is expected to increase. This is the direct result of changes in pavement design requirements and construction materials specifications that stipulate the use of high quality crushed stone, particularly for highways and transportation infrastructure.

Currently within the GTA, 55 per cent of aggregate consumption comes from gravel pits and 45 per cent comes from quarries.

However, the demand for crushed stone from quarries is projected to increase to 53 per cent over the next 20 years to meet the aggregate needs of the GTA.

So the question is, what options exist to supply the GTA with its high quality crushed stone needs? Two courses of action exist: license new sites close to the GTA market area, or import the aggregate further from market.

To implement the provincial policy, new supply would be replaced as close to market as possible; however, there are only two quarry applications going through the review process within 50 kilometres of the Vaughan Corporate Centre that, if approved, would represent 49 million tonnes. To maintain a close-to-market supply, additional sources are required beyond these applications.

This area contains some of the highest quality bedrock deposits in southern Ontario; however, timelines for decisions, public opposition, and uncertainty in the application process may be deterring investment. On average, in the GTA the process to license new supply is 10 years from the commencement of background studies until a final decision is made, and this does not include the timelines to acquire the land.

Some recent Ontario Municipal Board and Joint Board decisions have suggested that the application process would benefit by clarifying the tests and policies that apply to new or expanded mineral aggregate operations due to the complex planning issues associated with rural resources. The Province has an opportunity to improve the licensing process, clarify the policy framework, reduce review timelines and encourage new supply while still protecting environmental, agricultural and water resources during the current Coordinated Land Use Planning review and Aggregate Resources Act review.

The other option to meet the aggregate needs of the GTA is to import aggregate further from market. In 2009, the Province concluded there were 670 million tonnes of high quality bedrock resources (i.e., crushed stone) approved for extraction (less the last seven years of production) within 50 to 100 kilometres of the Vaughan Corporate Centre.

In 2009, the Province examined alternative modes of transporting aggregate, including the potential transport of 35 million tonnes per year from North Bay via rail to the GTA over the next 30 years. The results of the study confirm that compared to the current policy direction of sourcing aggregate close to the consumer, there were significant economic, environmental and social impacts of replacing closeto-market aggregate.

Shifting the supply model to rail from North Bay would cost $8 more per tonne, doubling the per tonne cost of aggregate. It would also generate an additional 14.4 million tonnes of greenhouse gasses and consume 2.8 billion litres of extra fuel. Other considerations include the need to expand the CNR rail yard in North Bay; the requirement for 20 trains per day in each direction; and the need to construct 12 redistribution terminals in the GTA with the capacity to handle three million tonnes of aggregate per year to enable trucking of aggregate to job sites.

Consistent with the concept of the 100 Mile Diet and Eat Locally Think Globally, sourcing aggregate close to the consumer is in the public interest and eliminates unnecessary economic and environmental impacts.

The Province is updating the 2009 study this year to examine both sand and gravel, and bedrock (crushed stone) supply within 100 kilometres of the GGH. This information will continue to help inform policy decisions and assist in developing a strategy to ensure that the key ingredient to implement the Growth Plan is available. 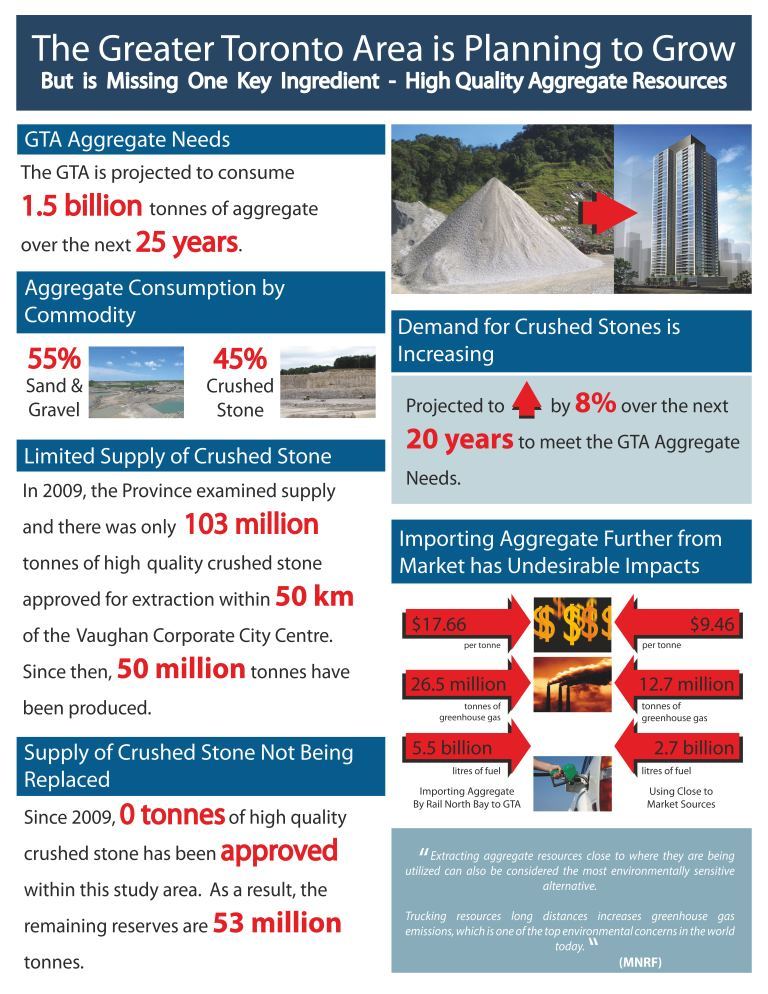